by  Flora Alexandra  I  digiQualia.com 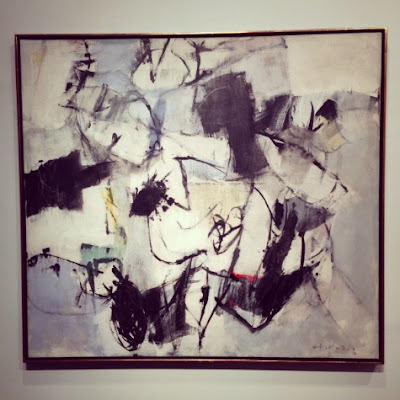 13th October – 17th November
“Like most Italians, Afro knows how to celebrate. The fanciful, ebullient side of his nature emerges in the high-keyed recent paintings—those in which he allowed himself the most freedom and spontaneity to date. In these, he celebrates the delights of senses”                                        Dore Ashton, Afro, 1955 in Art Digest.
Alongside exhibitions of Lucio Fontana and Alberto Burri’s work in Mayfair this month, we now have another post war Italian painter joining the ranks. Afro Basaldella’s exhibition has just opened at the Connaught Brown gallery on Albemarle Street, London. Despite it being the night before the Frieze art fair’s private view, the gallery was overflowing with collectors, painters and the darlings of the London art world. I must admit that with Afro’s emotionally charged Via Dell’Anima, 1962 in the window, it proved all too tempting to sneak in for a look. The work, with its atmospheric, grisaille colour palette and heavy brushstrokes was verging on a seascape, but with the abstraction to give it an air of mystery. As further demonstrated by this later work, the early stages of Afro’s stylistic development in the late 1940s were heavily influenced by Paul Klee and Cubism. However, you could tell from the profound looks of those who surveyed it, it wasn’t being viewed on the level of his other more celebratory, festive works, but in a darker realm. As James Sweeney, a past curator at the MoMa said, “the spirit of his art is festive. Though a wistful note may occasionally creep into his palette, he never strikes a tragic one” – I’m not sure if I agree. 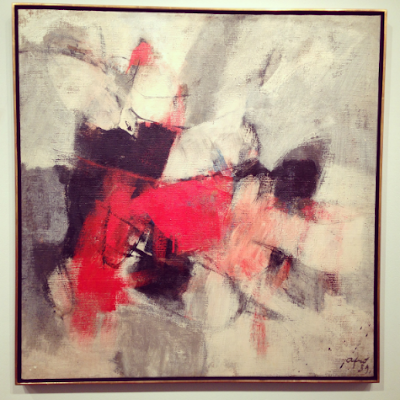 Despite not being particularly well known in London, Afro’s work has a strong reputation across continental Europe. It’s testimony to the innovation of Connaught Brown that he is being exhibited just as Frieze attracts some of the world’s finest collectors to London. The centrepiece of the exhibition was Tiresia, 1975, a beautiful blend of neutrals, with the near figurative shapes of Dali or Picasso entwined. I was rather drawn to the subtlety of the pinks, creams and cobalt blues, which brought a sort of romance to the table, unseen in the rest of his work. Despite his later focus on abstraction, Afro acquired his technical skill as a painter in Florence and Venice, before winning a scholarship to Rome. One might say that in honing his technical skill, he was learning the alphabet in order to be able to truly express himself through abstraction. In the dark, melancholic contortions of Senza Titolo, 1966 you see a sense of nostalgia for more traditional forms of draughtsmanship and painting, which reflect his academic training. The work was beautifully framed, drawing our attention to the diverse array of frames used across the room, making the collective exhibition feel all the more eclectic. 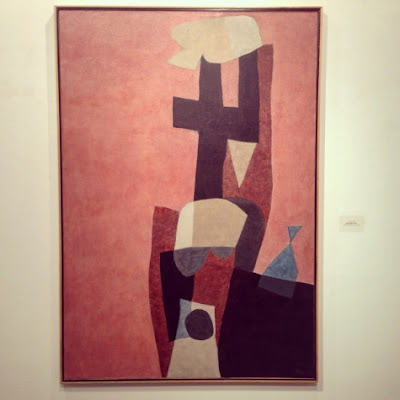 As his reputation developed, Afro’s work was exhibited both at the Rome Quadriennale and the Venice Biennale during his lifetime. In fact, back in World War II he had also brought creativity to a dark period as he taught mosaic-making at that city’s Accademia di Belle Arti. Later, he had travelled to New York and began to reflect his American influences such as the Art Informel movement and the work of Arshile Gorky and Jackson Pollock. Pollock is reflected in the spontaneity of the mixed media work Villa Horizon, 1959. There was an intensity and anger to it, which only served to magnify the depth of feeling across all of Afro’s compositions. With bold and brutal strokes of scarlet hues combined with the blacks and greys, the viewers who stood before it all seemed captivated by its energy. This was finished soon after painting a mural for the UNESCO headquarters in Paris in 1958 where both Picasso and Miro had previously worked. Only a few years later he was honoured with the Guggenheim award in New York, before he settled in Florence to teach at the traditional Florence Academy, where my companion – an artist himself – had studied recently. The art world may be moving fast, but some things never change. 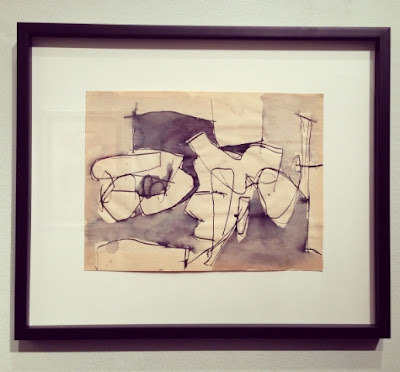