Share on facebook
Share on twitter
Share on pinterest
‘The cultural reality today evinces a far more protean social and cultural condition and it seems that such impositions curtail artistic, cultural and theoretical production, which are largely complex in terms of provenance, identification and history.’ Koyo Kouoh, curator of FORUM.
This autumn is the 1:54 Contemporary African Art fair’s third edition, with a staggering 14 of the 38 galleries coming from Africa to celebrate the multiplicity and diversity of contemporary African art. Led by Touria El Glauoi, the fair has worked to build provincial art scenes in African countries, promoting artistic production and a sense of cultural identity amongst those artists. Touria and I met at a TED talks conference early this year and though I was disappointed to miss the fair being launched in New York, its arrival in London was worth the wait. Designed by the award-winning architectural studio RA projects, the fair was beautifully arranged with a sense of space and fluidity unseen at Frieze or Masterpiece. 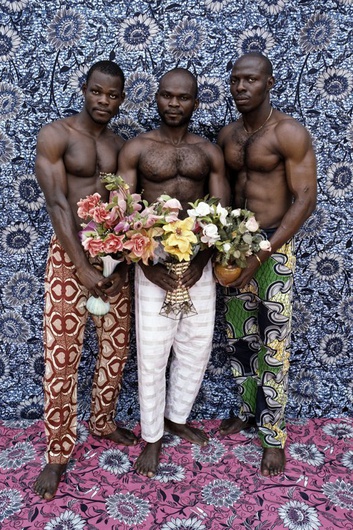 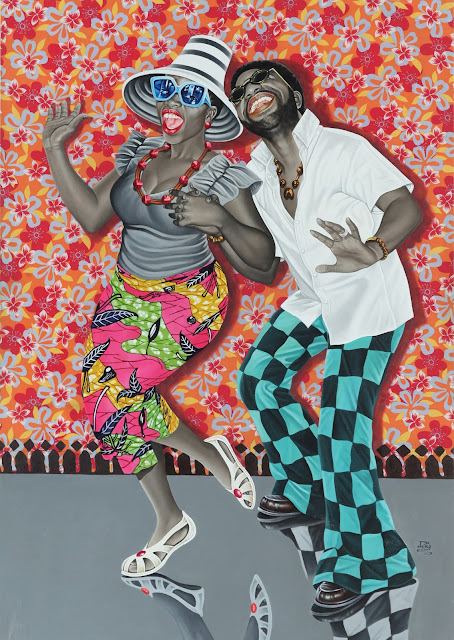 We began our exploration of the fair at the Magnin-A Gallery, immersing ourselves in the work of the Congolese artist Jean-Paul Nsimba Mika who focuses on kaleidoscopic narrative scenes, which critique the political system. Currently featured in the Fondation Cartier’s Beauté Congo exhibition in Paris, I was seduced by their centrepiece Kiese na Kiese, 2014. The spirited painting captured a couple dancing against a backdrop of kitsch floral wallpaper, imbued with a sense of movement that brought rhythm to the canvas. Hypnotized, I was soon transported back to the Kirstenbosch gardens of Cape Town, where we had danced to the Afro-fusion band Freshlyground.
I thought that the American-born artist Ayana V Jackson’s work was particularly poignant, because I was captivated by the highly political, yet intensely beautiful image Dictatorship, 2012 from the Poverty Pornography series. Both her reportage and studio-based photography depicted constructions of African and African American identities as she sought to consolidate the experience of contemporary Africa and the African diasporic societies, which she hails from as a descendent of the slave trade. 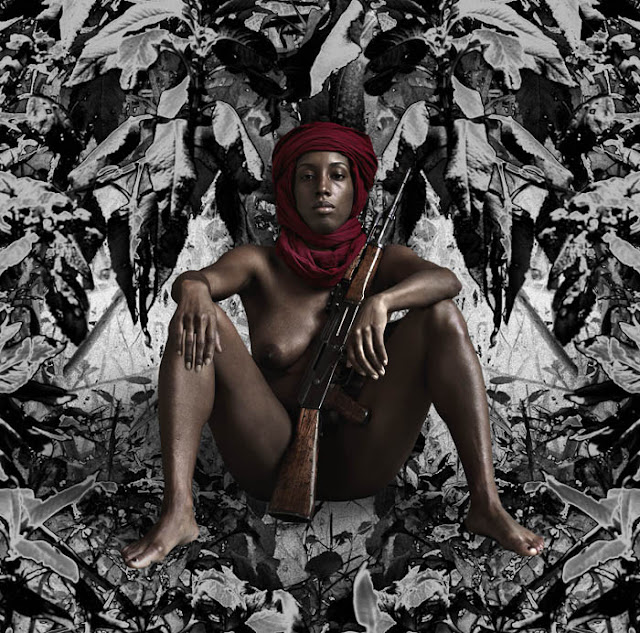 The Tunisian artist Yasmine Ben Khelil exhibited her collages with the Selma Feriani Gallery, exploring a range of characters from different socio-political and circumstantial origins in works like Untitled II. Her ink and pen interventions on paper incorporated marine patterns, glitter and felt tip pens to parody dictatorship, reflecting the underlying sense of political insurrection seen throughout the fair. The contrast between her polychromatic textures and the timeworn black and white photographs beneath was both beautiful, and highly original. For me, there was a personal sense of nostalgia to her work, as I remembered searching for late 19th century portraits in the flea markets of Paris.
Jack Bell’s gallery exhibited the Beninese photographer Leonce Raphael Agbodjelou whose imaginative work captures the experiences of a generation caught between tradition and progress. I first saw his dynamic work at the National Portrait Gallery’s Photographic Portrait Prize and was enraptured once again as I stood before his Muscle Men series. I admired the juxtaposition of the intensely male physiques with symbolic and blossoming African patterns more likely to be associated with a more effeminate subject. 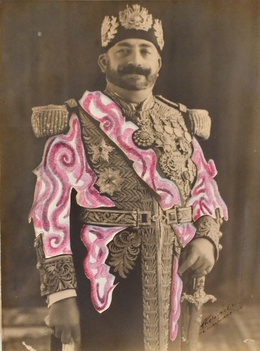 Namsa Leuba examined African Identity from the perspective of the Western imagination through fashion, performance and film. In partnership with Art Twenty One, her work combines her anthropological interest in the traditional customs of New Guinea with an aesthetic influenced by the fashion industry. Her series African Queens was bright and engaging, reminiscent of the luminescent pages of an indie art magazine like Dazed and Confused or Interview. Having been overwhelmed with stereotypes of what African art should be, I was pleasantly surprised by the eclectic nature of the works on display, which defied convention and challenged the norm.
1:54’s educational and artistic programme featured films, lectures and panel debates curated by the Cameroonian cultural producer Koyo Kouoh. Before departing, I caught the FORUM curator’s conversation with Zoulikha Bouabdellah, in which they discussed Body Talk: Feminism, Sexuality and the Body in the work of African artists with the phrase, ‘tu crois que vraiment que parce que je suis noire je baisee mieux’ glowing above them. Beautifully introduced by Poppy Field, Koyo and Zoulikha went on to contemplate the sexual projections placed upon African women, the concept of the body as a conduit of artistic expression and the relevance of feminism in African art. Unsurprisingly, we left feeling invigorated and energized by their conversation.
Flora Alexandra Ogilvy is a London-based art journalist who founded the art and culture website www.arteviste.com in 2014.