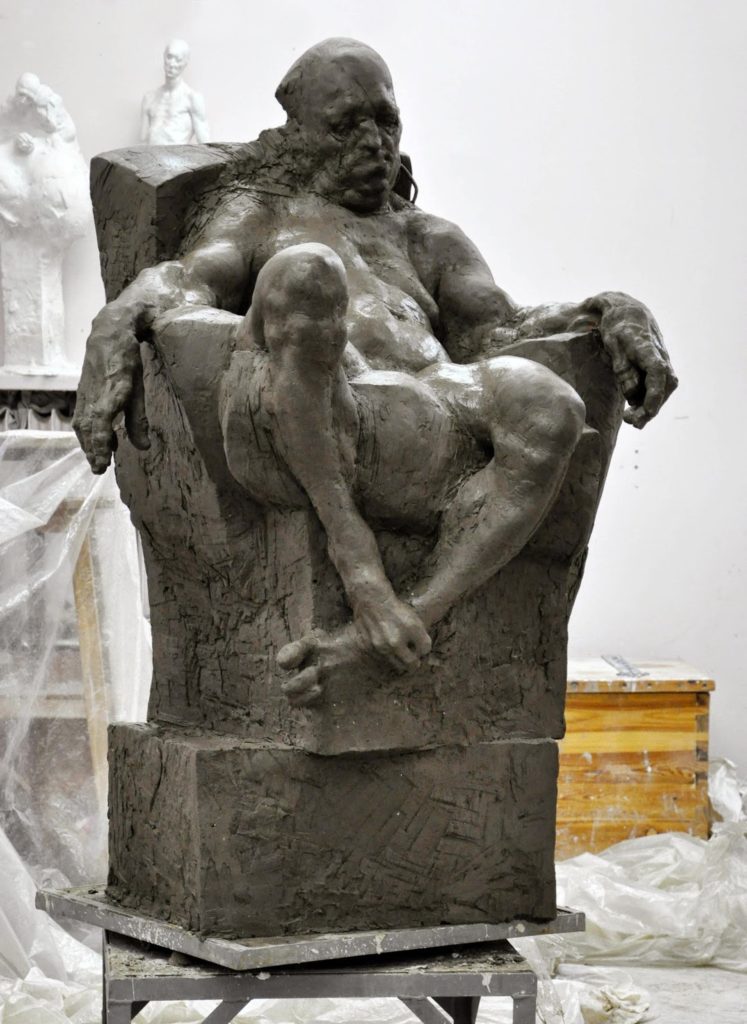 Grzegorz Gwiazda forefronts the avant-garde of figurative sculpture. Rather than simply sculpt in reference to nature, he strives to transcend it. To create new, independent entities.
Little wonder therefore, that I have chosen to present my recent interview with Grzegorz in two parts. In this, the first part, Grzegorz discusses four sculptures; behold the man, Cyclist, Dead Minotaur and Sitting Man. The next takes a closer look at Grzegorz as a person. At what makes him tick.
behold the man is Grzegorz’s first professional piece. Modelled whilst working on a diploma at the Academy of Fine Arts in Warsaw, it marks the beginning of Grzegorz’s sculpture as we know it today. He represents the human body in the reality that we too often ignore: ‘frail and transitory’. Through the unification of the base and figure, through medium, Grzegorz strove to communicate ‘man’s integrity with the world’. Neither is immune to destruction.
By emphasising imperfection, Grzegorz forces his viewer to also consider ‘the material sphere’ of humanity. Yet, he does not deny the body as the reference for aesthetic beauty. The lone figure is placed at the centre of the composition. In this isolation we find the paradox. Grzegorz not only accentuates mankind’s frailty, but ‘pays homage to it’.
Grzegorz does not struggle to find inspiration. He considers the work of other artists, social and personal issues… indeed, he ‘investigates’ himself. This ‘auto-therapy’, as Grzegorz has fondly dubbed it, is particularly poignant in Cyclist.
Studying Pieter Bruegel’s The Fight between Carnival and Lent, Grzegorz realised that being human is the ‘coexistence of tragic and comic elements’. And so, the concept of Cyclist was born: balance. And in particular, our inability to find peace amongst daily contradictions.
Then came the form. Grzegorz’s figure is caught in suspended animation upon a unicycle. A vehicle traditionally used for show rather than practicality… bold and brash strokes paint the figure like a clown. Forever cycling, but going nowhere at all.
Despite such introspection, Grzegorz does not provide his viewer with answers. Rather, Cyclist is the cipher through which he asks ‘are we able to get somewhere… to a kind of Promised Land? Or is the best thing… to stay balanced as long as we can? Are we travellers or are we playing a role in the circus of life?’
Another work provoked by art of the past is Dead Minotaur.
Picasso’s engraving of Theseus killing the Minotaur unsettled him. Picasso depicts the Minotaur in an almost peaceful manner. To Grzegorz, it ‘didn’t look like a monster’. Instead, Grzegorz found himself sympathizing with the Minotaur believing that ‘It wasn’t the Minotaur’s fault’.
Turning to the original myth, Grzegorz began to consider the mechanism by which Theseus overpowers and outlives the Minotaur. A ball of string. The sword of Aegeus. Grzegorz found himself asking was Theseus so strong? Or was the Minotaur weak?
Did it even matter? Grzegorz had identified that the root of hatred for the Minotaur was in his physical difference.
The adjectives ‘kalos kagathos’ recur in classical Greek texts. Literally translating as ‘beautiful good’, this phrase was summarised by the classicist Werner Jaeger as ‘the chivalrous ideal of the complete human personality, harmonious in mind and body, foursquare in battle and speech, song and action’.
Grzegorz points out that the opposite is ‘ugly and bad’. Like the Minotaur. Grzegorz identified this stereotype in various books, cartoons and films. The physical difference of characters deemed bad allows the audience to recognise them as a threat to social order. Too easily, these irregularities in appearance transform into ‘monstrous elements… signs of sin’.
Finally, Grzegorz found redemption for the Minotaur in the anthropological philosophy of Rene Girard. Girard details the scapegoat mechanism as the origin of sacrifice and the foundation for human culture. Grzegorz thus renders the Minotaur headless.
He asks, with a body like any other man, can the viewer still judge the Minotaur as a monstrosity? As a monster?
He says, ‘My Minotaur is more like Christ than a mythological creature’.
This was not the first time Grzegorz broke the boundaries of formal realism. A style so bold he has been styled ‘Gwiazda the heretic’ by the curator Marco Izzolino.
It began with Sitting man.
Sitting man speaks of unused potential. A single male nude figure slouches into a drooping, twisted armchair. Without distinction between skin and cushion the forms melt together. Yet, the man’s oversized hands are defined. Their strength and power recalls the hands of Pope Julius II as painted by Raphael… but in Grzegorz’s sculpture such ‘potential is wasted’.
Grzegorz began modelling with ferocity, quickly finding the form. It was ‘fresh’ and ‘powerful’. But, as the work came closer to competition, this once visible energy disappeared. When his sculptures threaten to be ‘lost’ Grzegorz knows it is time for the ‘real sculpting’ to begin. He searches reality and strives for depth. He imbues it with questions, wanting each piece to ‘be an enigma that you want to solve.’
I soon discovered that the greatest enigma is Grzegorz himself. But more of this in my next blog…