When did you know you would become an artist?
I’ve painted since I can remember. My mother told me that I started intently painting around six.
But it wasn’t until I witnessed a school shooting at the age of 18 that I knew it would be my career. After that, it wasn’t so much that I made a decision, but rather my perspective had shifted and I simply knew.
Where did you train?
After moving to NYC with little more than two dimes to rub together, I studied at the New York Academy of Art. Subsequently, I painted for Jeff Koons for two years and then apprenticed with Odd Nerdrum for three years. 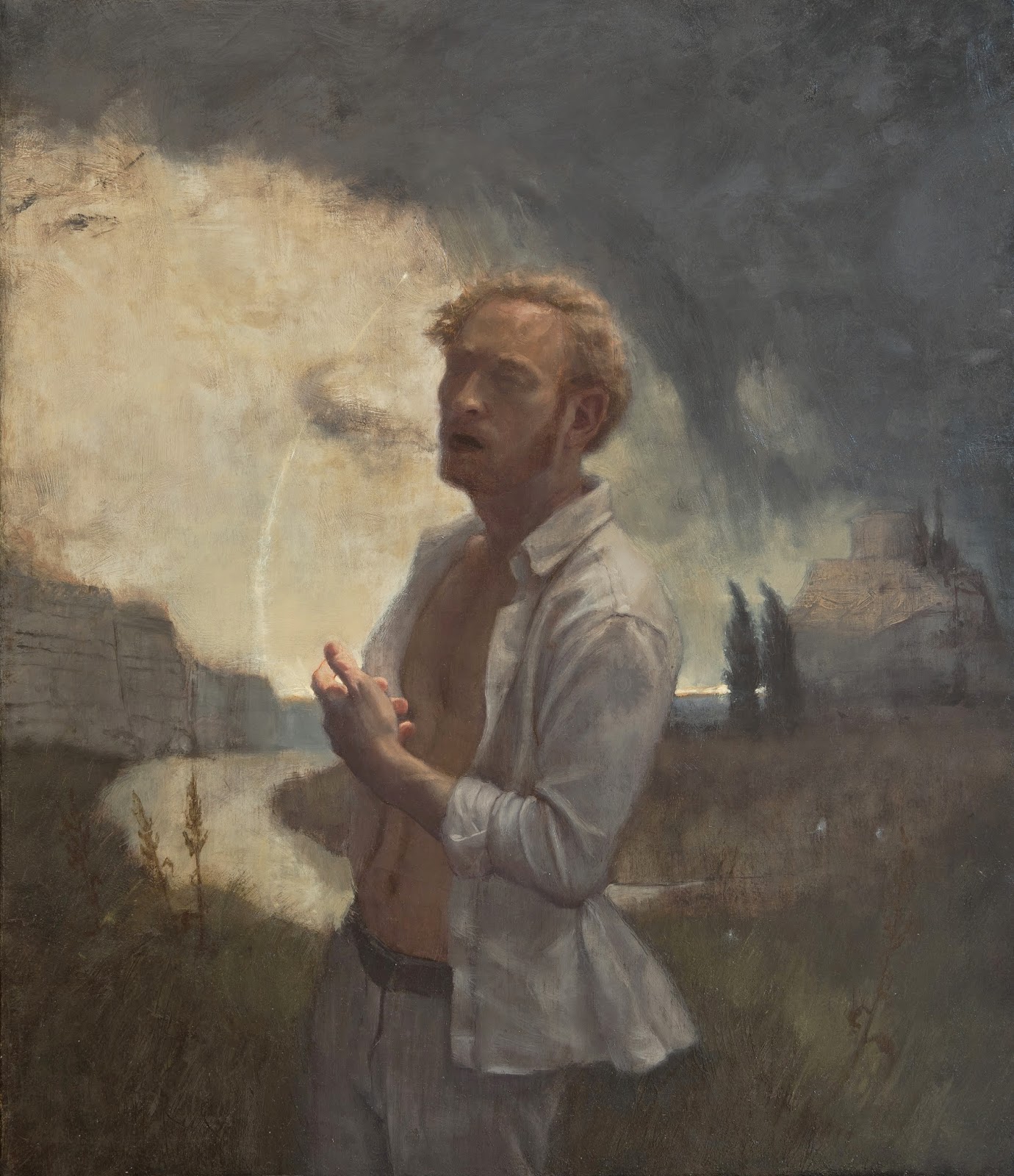 The Sophist
You have stated that you divide your time between the US and Paris? Why Paris?
I moved to Paris because of Odd Nerdrum. He had a summer home there, which he asked me to look after and help manage the other students. While living amongst the decaying grandeur of Nerdrum’s palatial estate, I fell in love with the culture, the food, the people, and so I made connections in Paris and began exhibiting at Galerie L’Oeil du Prince, which is still my primary gallery.
Why painting over other artistic mediums?

I’ve tried many other media, from writing to photography, installation, printmaking, ceramics to video, but none of them could quite express my thoughts and emotions the way that I desired.
For me painting is a first language. Of course, this has made my path difficult at times – as the market and major institutions reward work that synthesizes forms rather than ventures deeply into one. And though, I have no quarrel with others making art that skims pleasantly across the broad placid surface, I’m more intrigued by the depths of the abyss below.
Though, I realize that this quality separates my work from the contemporary, I don’t see that as a problem. 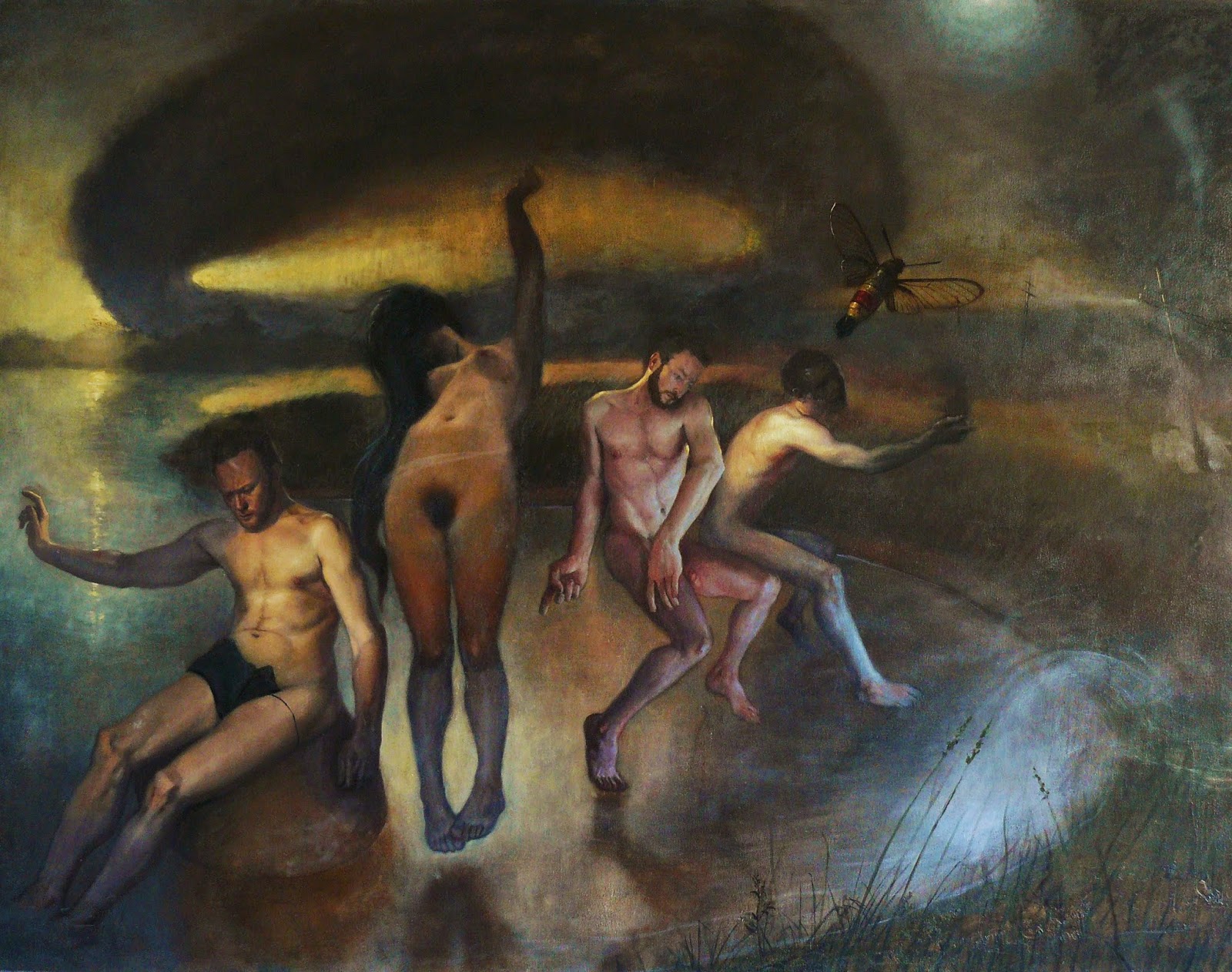 Hermetica
Why do you paint figuratively? What is it about figurative painting rather than conceptual art that attracts you?
Firstly, I don’t believe that painting figuratively is necessarily non-conceptual. The works of the Old Masters expressed profound and poignant concepts. Further, there are many conceptual artists today who make figurative paintings… though what they do is categorically divergent from what I do. So, I understand what you mean. Conceptual art tends to be cerebral, which I find entertaining, but it also tends to be emotionless. It follows Kant’s principle of aesthetic indifference. On the other side of the coin, some abstract painting may convey some degree of raw emotion, but it doesn’t convey it precisely, nor does it convey narrative, allegory, or depth of meaning. I find intellectual games and experimentation interesting, but ultimately not very meaningful, and neither cathartic nor transformative. For that my work requires both conceptual depth and emotional poignancy.
To make work that speaks both to the mind and the heart requires a language that the viewer can apprehend immediately, intuitively, pre-cognitively. And we humans are wired to respond in the most subtle and powerful ways to other humans.

This is yet another reason I’ve little interest in painting in a Contemporary style as in order to speak in the literary, Post Modern language of Contemporary art, I would have to sacrifice a great deal of emotional potency, aesthetics, and compositional structure in order to set the stage for linguistic inquiry into the context of the piece. The path of distillation/deconstruction traced from Modern to Post Modern thought was a valuable path of analysis, but I feel that I’ve graduated from that school of thought and have embarked on a different path.

Quite a number of painters, composers, and authors I know have found themselves following this path of reconstruction – and finding each other – we’ve realized that we belong to something of a mass exodus from the linear path of Art History. In an attempt to understand what we’ve observed, I’ve been outlining the parameters of our shared philosophy, which lead me to discover the term Post-Contemporary. Coined by Primo Levi in the 1980’s, and since forgotten, it seemed to define perfectly, the reconstructive ethos to which we all gravitate.

Just as “Modern Art” is defined by stylistic parameters rather than the actual meaning of the term, “Contemporary Art” holds its own stylistic and philosophical limitations, chief among them is the primacy of the transient “now”, rather than the themes relevant to any human era.

How does figurative art continue to be relevant today?
Figurative painting and sculpture has always been relevant because we have always been human. And it will continue to be relevant as long as humans live somewhere in the cosmos.
Many of your scenes have a timelessness to them and often feature period interiors or costumes. Is this influenced by the style in which you paint or for another reason?

We are interesting beings. We walk backwards into the future, peering into the hazy past, for that is all we can see. But those who can see farther, perhaps beyond the horizon, may have a better understanding of what they might stumble upon behind them. In some ways we are like the men in Plato’s allegory of the cave.This is why my interest lies in expressing human experiences that transcend time, culture, and geography. Even when I paint something that clearly takes place today, my goal is to find the universal… the timeless, the meaning that will transcend our own time and place and retain its meaning for people a thousand years from now. I’m more interested in the light source than the shadows it casts on the wall. 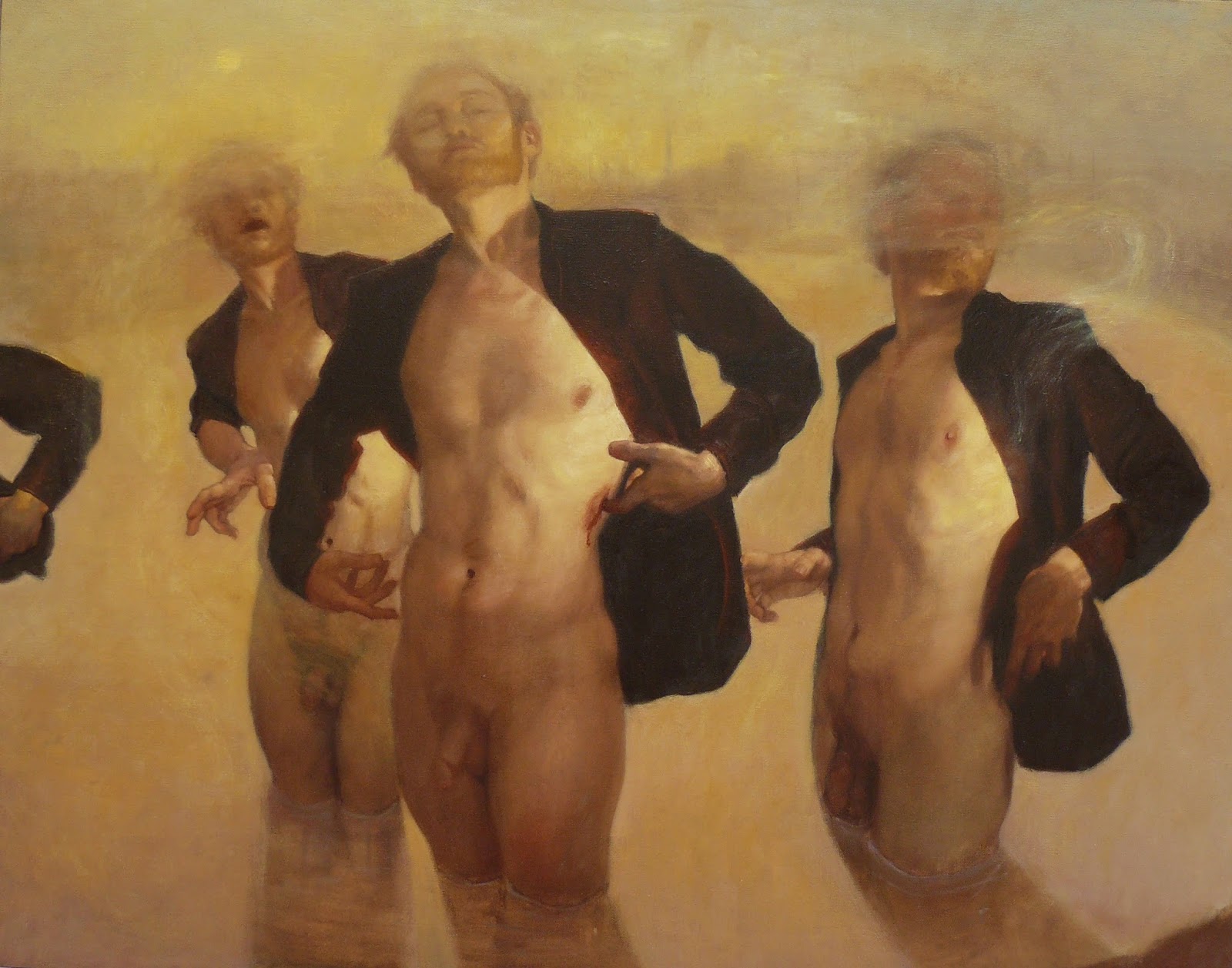 Baptism
Nudity, in one way or another, features heavily for your work (and saw some of your work removed from Facebook). Why?

The nude is an excellent vessel for conveying meaning without the context of time, culture, or social standing.
Is there one movement that influences you more than another in your work?
The Baroque period is certainly the strongest influence and Romanticism and Symbolism are close to my heart as well. Nevertheless, what I do is not limited to drawing upon the tradition of 20th or the 16th century, but is free to be sincerely and unabashedly influenced by every era. I prefer to have an unconstrained historical palette with which to paint, and I’ve noticed that I’m far from alone in this.
Apart from art, what inspires you? Especially with regard to your compositions.
Much of my work draws upon philosophy, theoretical physics, and literature – particularly magic realists such as Italo Calvino and Jorge Luis Borges. More recently, I’ve been trying to make sense of personal experiences, specifically the school shooting I witnessed as a teenager, which has spawned an interest in the politics of identity, and the history and origins of violence in the American culture. My hope is that somehow my work can be a means of questioning, a path to better understanding, and a means of healing. I believe that even the subtle shift in perspective that the arts can bring to our lives, both as one who creates and one who experiences the creation, like the butterfly effect, does nothing less than influence the path of culture. 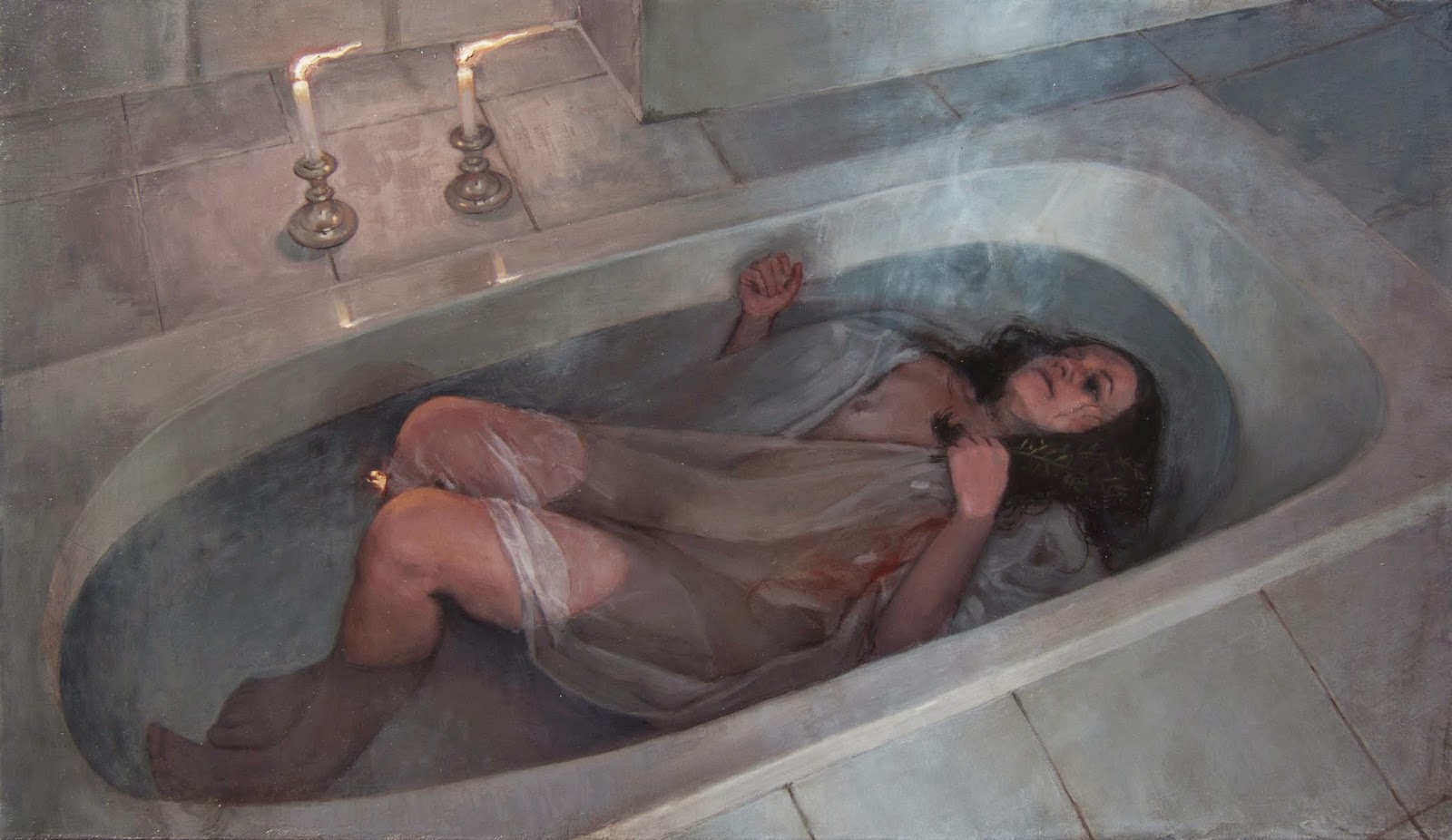 Rosemary and Rue
All images are reproduced courtesy of the artist. For more on Richard T Scott see his website here.