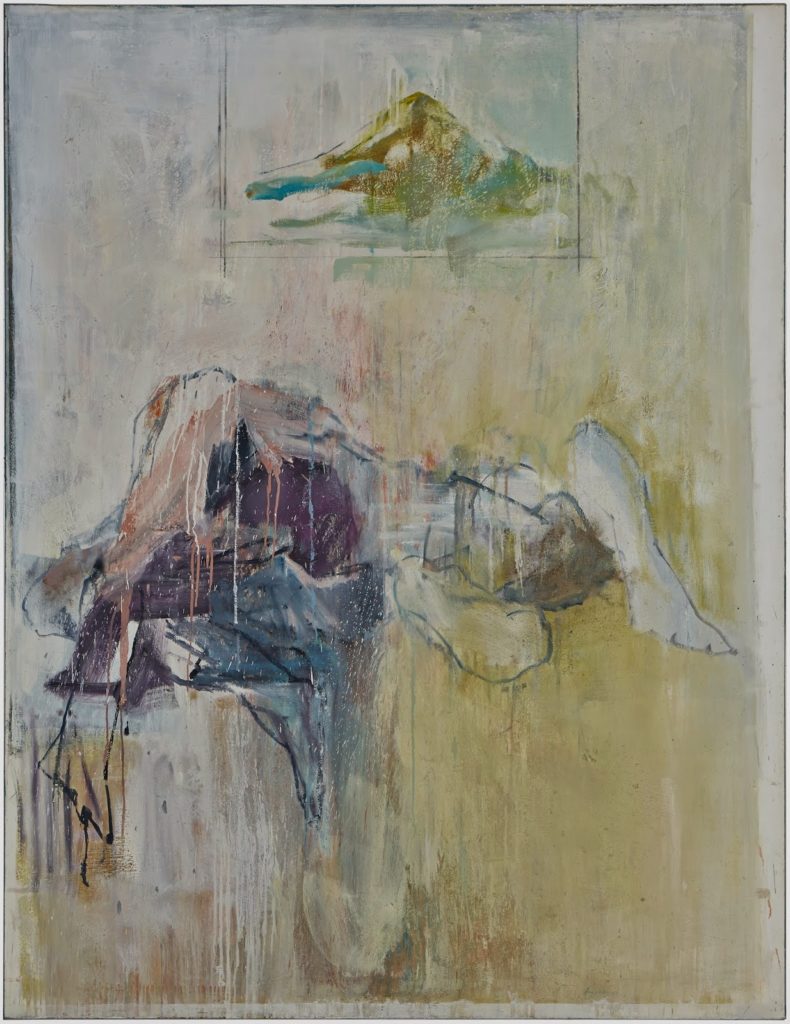 In one of his trips to the region in 1841, the English painter J.M.W. Turner made a watercolour sketch of the town of Bellinzona in Switzerland, near the boarder with Italy. In a style that has become particular to the painter, he manages to blend the detail of the buildings with the vast, indistinct forms of the Swiss Alps, drenched liberally but precisely in colour.
It is fitting that Turner is one of the first antecedents that comes to mind when looking at the large, richly coloured paintings of Cesare Lucchini, who was born in the same town exactly 100 years later. Currently exhibited at the Rosenfeld Porcini gallery in London, at first glance Lucchini’s paintings appear completely abstract. On closer inspection, amidst the colour there appears human forms, most mutilated, often disembodied, amidst the detritus of battle – barbed wire twisting over and into limbs.
From Battlefield to Paradise, then, is an appropriate title for the 74 year old Swiss artist’s work. On meeting him at the exhibition’s opening, the artist had a liveliness that belied his age. It would be easy to presume that the scenes of suffering in his paintings, the remnants of war revealed as the dust settles, are imagined. But, having been born in the middle of the Second World War, in the centre of a continent engulfed in fighting, Lucchini’s work speaks of the destruction that was being wrought in Europe.
Like his contemporary Anselm Kiefer, there is a sense of coming to terms with the mechanised warfare that erupted and subsided around Switzerland in the middle of the last century. Lucchini has always focused on catastrophic events throughout history, reflecting the 2010 oil slick in Mexico, the drowning of many refugees attempting to reach Sicily and the use of child soldiers in his work. In this series of paintings, however, the artist speaks more generally about the human condition and its inability to overcome its limitations.
Significantly, echoing Turner’s sketch of Bellinzona further, through the windows of the many rooms in his paintings Lucchini has depicted snow covered mountains, suggesting he is placing his rumination on human suffering within a context he is familiar with. The Swiss backdrop can also be understood as the unattainable heights that man attains to, but can never achieve. They are the paradise that, invented by man, invented by Lucchini in his paintings, sustains those who face death.
There’s much meaning in Lucchini’s paintings at Rosenfeld Porcini and, as evident in this review, it is easy to overlook their formal qualities. And yet as much as the artist can discuss the universal, elemental nature of humanity, he also has a masterly command of his medium and colour. In these works the barbaric, horrifying scenes are made more poignant, more significant by the striking and attractive way in which they have been painted. Their content aside, Lucchini’s paintings are horribly beautiful to look at.
From Battlefield to Paradise runs until 21st March at Rosenfeld Porcini in London.